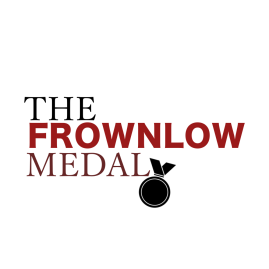 Former NRL player Matthew Lodge was dying to be inducted into The Frownlow Medal Hall of Fame. He was so determined, he banged up a broad and got banged-up abroad.

Lodge assaulted a man and a woman and terrorised a family during a wild, drunken night in New York in 2015 and subsequently spent time in a US prison.

The former Wests Tigers player has been ordered to pay his victims damages of more than $1 million dollars, just as he applies for permission to play in the NRL again.

The Frownlow Medal is awarded to the player whose off-field demeanour epitomises the values of the modern day footballer and draws attention to the status of footballers as role models to young Australians. It covers Australia’s four major football codes; the National Rugby League (NRL), Australian Football League (AFL), the A-League (Football) and Rugby Union’s Super Rugby competition. Kiwi international and Sydney Roosters player Shaun Kenny Dowall won the inaugural medal in 2015, while Corey Norman from the Parramatta Eels won in 2016.

Lodge grabbed and threatened to kill a young woman before forcing his way into her apartment building. He then assaulted a man who tried to defend the young woman and forced his way into the man’s apartment, which he proceeded to smash up.

Recognising the insanely high level of competition for places in The Frownlow Medal Hall of Fame, Lodge then tried to violently force his way into the locked bathroom of the man’s apartment, where the man’s wife and young child were hiding.

The prop’s wild Frownlow Hall of Fame bid came to an end when he was arrested at gun point by NYPD and thrown into a cell at Rikers Island jail.

Lodge was soon released from prison and his since then made a concerted effort to win a place in the NRL and in The Frownlow Medal Hall of Fame.

NRL fans are now anticipating the potential clash between Lodge and Hall of Fame inductee Russell Packer of the Dragons, who also spent time in prison for assault.

Inductions into The Frownlow Medal Hall of Fame will be made later in the year.