Fremantle Dockers Michael Johnson and Shane Yarran launched a premeditated, preemptive, preseason bid for the 2017 Frownlow Medal recently when they came under investigation for separate alleged incidents of assault.

Yarran is currently under investigation for alleged assault involving a family member while Johnson is suspected of a pantless assault on a teacher in a kebab shop. Yarran also pleaded guilty to disorderly behaviour outside a nightclub in June 2016.

The Frownlow Medal is awarded to the player whose off-field demeanour epitomises the values of the modern day footballer and draws attention to the status of footballers as role models to young Australians. It covers Australia’s four major football codes; the National Rugby League (NRL), Australian Football League (AFL), the A-League (Football) and Rugby Union’s Super Rugby competition. Kiwi international and Sydney Roosters player Shaun Kenny Dowall won the inaugural medal in 2015, while Corey Norman from the Parramatta Eels won in 2016.

Both players made their play in the very early days of the AFL off season in order to improve the Frownlow fortunes of the Dockers, which has never received a nomination for the award.

“Mate, deadset, this award is so hard to win,” declared Yarran.

“There were about 60 nominations last year and this year Jobe (Watson) even handed back his Brownlow to try to win it, so we had to make a statement.”

“We had to strike hard and strike early,” elaborated Johnson. 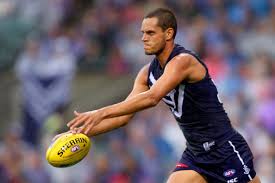 “I mean, Corey (Norman) might have done the whole drugs and bikies thing but he didn’t get charged with assault did he?, and he didn’t do it in a kebab shop.”

The Frownlow Medal judging committee was at pains to explain to the pair that players must be formally charged with an offence in order to win the highly sought after prize.

The Frownlow Medal winners will be announced in October 2017.