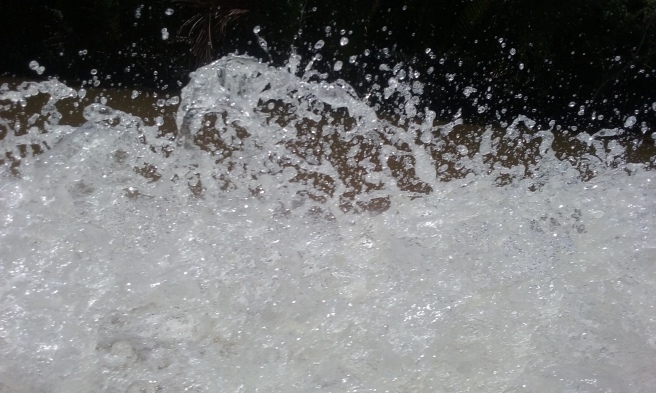 It’s a bad sign for a rafting trip when the highlight of the day occurs miles from a river.

The trip down the Xiguluan river near Hualien, Taiwan, started well enough. We were given life jackets and headgear and shown an instructional video; but then things took a turn for the worse.

Boats were chosen randomly by groups of friends, thus I was grouped with eight friendly but inexperienced Taiwanese women. The paddles we were given looked more suited to scooping ice cream than controlling watercraft, but as I was soon to discover, this wouldn’t really matter.

The guide then joined our raft, but only to rest the zip lock bag which contained his phone and cigarettes. He took to the water in an Inflatable Rescue Boat (IRB), where he and his colleagues remained for the duration of the trip.

The first few small rapids gave the occupants of the six rafts a chance to take in the scenery and engage in water fights, which were quite welcome on a hot, humid summer’s day.

As the rapids and the space between them increased though, the trip was ruined.

Seeing the largely inexperienced clients tire in the flat water, the guides threw them a rope and towed them down river, sometimes connecting up to three rafts behind one IRB. Great for more water fights, but not great for savouring the renowned scenery, which passed by in a blur.

Another method for controlling the rafts was to push them, like a tug-boat pushing a tanker. This was fine when our friendly but inexperienced crew was heading for the rocks, but was usually unnecessary.

At one point, I copped the nose of an IRB in the back. On another occasion the guide rammed us and started to push us. The closer we came to hitting the rocks, the more he pushed us away from them. His IRB ended up mounting our raft as he revved the life out of the engine, sending two women ducking for cover on the deck. Maybe this is why we were given helmets.

When not pushing or towing, the punks, or guides, busied themselves keeping their cigarettes dry and their clients wet, hooning up and down the river, splashing the rafts with diesel infused water – mmmm, nature!

Most of the trip passed this way, but just as my frustration grew, I saw a chance for redemption. A nice, clean, class three rapid lay ahead; the biggest so far. My companions also sensed the occasion and we readied ourselves for the challenge: ice cream scoops in hand, eyes fixed, ready to devour what lay ahead.

We inched closer and closer, steering ourselves towards the best line. At last ! I thought. But then, out of the corner of my eye, a blur of red.

The IRB approached. The guide shouted instructions. A rope was tossed aboard.

We were tied to the IRB with two other rafts and were towed, yes towed, through the best rapid of the day, and the next, also a grade three.  Instead of the thrill of being thrown around a rapid and fighting for control, we sat passively as the IRB flattened the bumps and we clung awkwardly to the raft.

As the raft snake wound its way down the rapid, passengers stopped steering and started splashing, but were often caught unaware when the snake’s tail inevitably slung towards the rocks. Only driver skill and a fair degree of luck prevented any serious injury. It also meant that the leg we had been instructed to dangle outside the raft often became jammed between rafts or river obstacles.

The trip appeared to please many of the clients, who appreciated the chance to have fun without the hard work, but it was less satisfying for those who enjoy the satisfaction and pleasant tiredness derived from hard work at the end of a trip.

The highlight of the day was joining my crewmates for a massive caramel ice cream, which was bigger than most of the rapids we were allowed to run – I should have brought the paddle.